Bo Gurks might be a nonsensical phrase but spend just a moment inside the Melbourne bar and bottleshop bearing the name and you’ll quickly discover just how serious the crew behind are about everything they do.

Located in the bayside suburb of Edithvale – directly over the road from Edithvale Station and only a block from the beach – they stock hundreds of beers in their fridges, keep their taps on constant rotation, and serve up woodfired pizzas fit for Queen Margherita herself.

Tying it all together is the warm and welcoming hospitality, which makes the experience of enjoying your first beer at Bo Gurks feel like you’re already a local.

The driving force behind the business is Jarred Turnbull, who first fell for better beer while working in London’s bars. Suitably inspired, once back in Australia he built Bo Gurks as a showcase of Australian craft beer with an atmosphere akin to those found in Britain’s old pubs.

As for the name, Bo Gurks stems from a slip of the tongue one of his mates made when he was asking for a beer. The phrase stuck and, given Jarred’s intention was to build a community hub for locals, it’s fitting this craft beer haunt would end up referencing an in-joke between close friends.

After searching Edithvale and its surrounds, Jarred found the perfect home for Bo Gurks across the road from the suburb’s train station. And, following a lengthy renovation, he first opened the doors in early 2021.

It doesn’t take long upon walking inside to understand Bo Gurks’ reason for being. Shared tables run the length of the venue, while an entire wall is taken up by a dozen fridges and an imposing pizza oven sits in the middle of the venue like its beating heart; clearly, this is a space designed to bring people together over a shared passion for quality food, independent beer, wine and spirits.

Venture further and you’ll find the eight rotating beer taps; on the off chance nothing there takes your fancy, there’s between four and five hundred craft beers – all of them Australian and independent – in the fridges.

The wood-fired pizzas, meanwhile, go well beyond those found in many bars or breweries. The team poured time and love into perfecting their dough and the result can be tasted in every mouthful: incredibly airy Neo-Neapolitan pizzas that developed a cult following in the area as soon as word got out.

Given Bo Gurks blends bar, bottleshop, restaurant and takeaway pizza place into one, it’s a tricky place to encapsulate succinctly. That said, the words “Australian Craft Liquor Boutique” that welcome guests inside do cut to the essence of Jarred’s vision: as well as being a bar and bottleshop, this is a place you can visit to discover new drinks while learning about the producers behind them.

Sure, on the surface Bo Gurks means nothing, but step inside, grab a beer, soak up the warm welcome, and soon it will all make perfect sense.

NB You'll find beers from indie brewers all over Australia at Bo Gurks. The below is a selection of those most commonly found on tap. 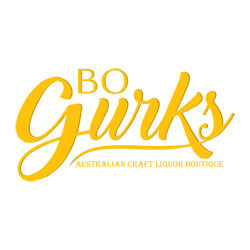 Beer Masterclass:
Join a feature guest brewer every Saturday from 2-4pm – see the socials for who's coming
Sunday Sessions:
Pizza, beer and live music from 1pm – check the socials for the latest lineup