If you’re a beer venue in Melbourne – especially one sitting in the middle of Collingwood – it’s simply not enough to just have good beer anymore.

That is something deeply understood by the team behind the revamped Foresters Pub and Dining. Following a facelift in early 2017, the sizeable beer venue has been reworked so that it’s less beer hall, more neighbourhood pub.

Where once there were collections of high tables and a scuffed up pool table, there are now plush dining booths and couches to entice even the most hesitant of beer drinkers to settle in for a meal and a pot of something tasty. Tropical plants and wallpaper dotted with hidden monkeys brighten up the window seats at the front of the building, while moody art deco style lighting and touches of brass in the main bar prove Foresters has truly left the "Hall" part of its former guise behind.

The 42 taps throughout the venue remain a showcase of the best in beer from Victoria and across the world, featuring the likes of Pirate Life, Boatrocker, Temple and Two Birds, as well as a strong showing from Kiwi and European breweries. Take a gander at the fridge and you’ll soon spot bottles of limited releases you’ll find hard to resist. Up on the shelves, Australian spirits make themselves known, with Starward, Four Pillars, Archie Rose and West Winds all standing tall.

The focus on beer doesn’t stop at the tap list though, thanks to the pub’s online beer club and the New Brew Tuesdays tasting sessions, featuring breweries keen to show off a new release to a willing audience.

Late night crowds remain – particularly with the draw of live music every Friday and Saturday and Woody’s dive bar doing a roaring trade upstairs – but the buzz begins earlier in the evening as groups spread themselves around a booth or bar table for a grain fed porterhouse steak or southern fried chicken burger from the revamped menu.

Foresters’ sister venue, the Terminus Hotel in Fitzroy North, has been upping the pub grub ante for years and now Foresters is following suit. Down at this end of Smith Street, it’s pub food with a refined touch; the parma and burger still hold their place, but you can just as easily opt for a freekeh grain salad or a pizza topped with slow braised lamb and chimichurri.

As the night goes on and the mix of patrons turns to those focused primarily on what’s in their glass, Foresters really comes into its stride. Beer lovers, music fans and everyone in between fill the room with the hum of a good night, or, in the case of Wednesday nights, the sound of people living out their rock star dreams thanks to Live Band Karaoke upstairs at Woody’s.

Despite only coming into being in mid-2014, it’s hard to imagine Melbourne’s beer scene without Foresters. Yet as the team opens it up evermore to those who may not consider craft beer the centre of the universe, it's set to become an integral part of Melbourne’s bar scene in general. Good beer is just a bonus. 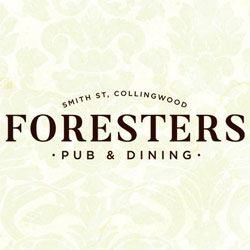 Get 25% Off All Packaged Beer at Forester's

On tap at Foresters Pub & Dining