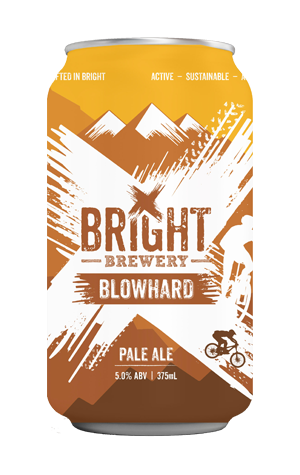 This American-style pale ale was always one of the most popular drops for visitors to Bright, with its gentle citrus characters making for a refreshing choice on hot days or after indulging in the region's many outdoor pursuits.

Then, during Jon Seltin's time there it was reinvented, with the Cascade hop replaced by a blend of punchy New World varieties and the malt bill beefed up a little too. We were at the brewery the day he was due to keg the first batch of the new beer, had a sample, and instantly started wracking the Crafty brain to think of a better Aussie brewed APA. Like a miniature version of his fine MIA IPA, it became a beer bursting with fruity hops, balanced by just enough sweet, caramel malts.

Roll forward a few years and the beer appeared in cans for the first time in October 2019. The beer inside remains an APA with plenty of character. It has a lovely bright and glistening appearance and is punchy on the nose: sherbety, candied citrus, a touch of pine to taste and a good bitterness. Bigger and a little sweeter than most pales on the market at the time the cans appeared.