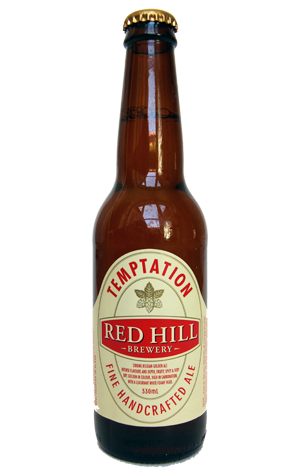 Crafty Pint notes from 2010 The Crafty clan once attended a superb beer dinner featuring the Red Hill range at Circa, in St Kilda, when Matt "Pope Joan" Wilkinson was still the head chef. The Temptation was paired with the appetiser in place of a glass of bubbly - and you can see why Matt picked it. Not just because of the amount of fizz that gives it a luscious foamy white head, but because of the flavour profile.

There are hints of white wine grape in there plus a touch of tartness. That's only part of the story, however, in one of the brewery's most complex brews. There's also a honey like sweetness and spices (white pepper, cardamon) in the taste, complementing a fruity (pear, grape) and candi sugar nose, and with the 8 percent alcohol tucked well enough away to make it one to handle with kid gloves.