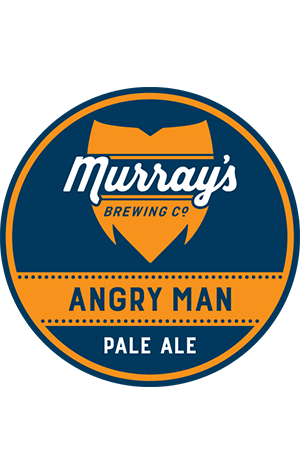 A mainstay in the Murray's range since the mid noughties, Murray's signature pale ale has changed a lot over the years. It used to be called the Nirvana Pale Ale but at some point towards the turn of the first decade the pursuit of Nirvana turned to rage and it was renamed Angry Man Pale Ale and had its recipe tweaked. However, a little extra angst certainly didn't do the beer any harm as it's gone on to be the brewery's flagship ale, available in all parts of the country, now in a tinnie that displays a boxing match between a man and a kangaroo.

With a bolder hop character far punchier than the original incarnation (which was something of a hybrid between US and English pale ales), this ode to a classic American Pale Ale is a light golden colour that hides its full bodied texture. Centennial and Citra hops serve up a main course of citrus garnished with pine and spice, with side dishes of biscuit and toffee to keep the bitterness in check. This pale ale has got the guts to sit beside a spicy Thai stirfry, but it's also got the goods to stand alone on an angry afternoon listening to Nirvana or getting beaten up by a large marsupial.