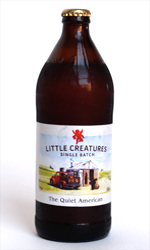 It's all go at Creatures these days. Hot on the heels of the Wet Hopped Pale Ale comes this hybrid US IPA / Belgian Trappist ale, while the Little Rabbit collaboration brew with their sister brewery at White Rabbit takes shape in Healesville. It's "Quiet" as a nod to the monks who brew the original Trappist beers and "American", well, because it's packed with pungent American Cascade and Chinook hops. This blending of styles is rather popular these days it seems, with Bridge Road's India Saison, Mad Brewers Hoppy Hefe and Mornington Peninsula's White IPA rolling out of breweries recently, and The Quiet American is one that allows both its yin and yang to shine. The hop aromas are first to hit, with some banana-like yeasty esters in the background, while those hops are back in play in the mouth, contributing both resiny flavour and a firm bitterness alongside some sticky sweet malts, with the fruity, slightly funky Belgian character coming increasingly to the fore as it warms. Complex and interesting, as you'd imagine the lovechild of a monk and a Yank to be.