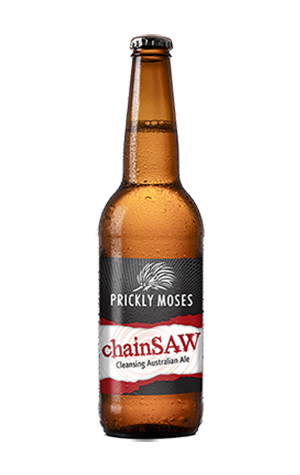 It's not that long ago that heads were turned and palates were pricked by the Bridge Road / Nøgne Ø India Saison for its combination of big, punchy Aussie hops and funky saison yeast - a combination of opposing styles that worked so well both brewers continue to make the beer for their respective markets. It wasn't the first beer to meld styles you wouldn't necessarily put together in a glass but was one that really got people talking.

Since then, there's been a wave of white IPAs, hoppy hefes and the like that throw hopping regimes more usually associated with strong pale ales into the mix with base beers in which hops are usually more of a supporting cast member, the bit part actor without any lines. The ChainSAW, which was originally trialled at the 2012 GABS, fits into that lineage, a wheat beer using Aussie hops, Ella (then called Stella), to create a beer that's got big tropical (and herbal) aromas and a sizeable bitterness playing with the flavours and body you might expect in a wheat beer. There are some sweet malt flavours in its cloudy yellow mix too, while the bitterness blends with a dryness to create what's akin to a summer refresher on steroids.

It's a beer that proved popular enough to move into the brewery's core range too, where its taken on the style Cleansing Australian Ale and you'll find it in both core range and bottles.