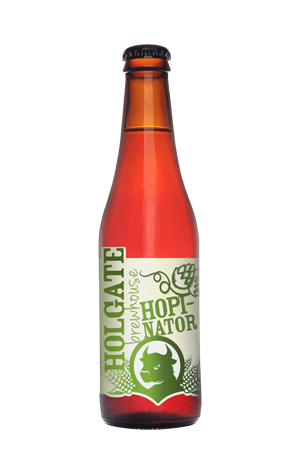 Brewers who aren't constantly tweaking and seeking to improve their beers are no doubt few and far between. And certainly that's been the case at Holgate Brewhouse in recent times, where they've been revisiting and subtly reinventing a number of their core beers. Among those are the Hopinator, their double IPA, that prior to the release of the Millennium Falcon was the hoppiest in their lineup of pale ales.

Over the years, as the recipe has changed, the alcohol content has risen, while the resinous character of the body remains, as does the firm, lingering bitterness. Rich amber in colour, with a foamy, slightly off white head, the aroma mixes the fruity with something almost herbal and spicy alongside the soft caramel malts. The hop flavours go deep too, with a hint of aniseed in there, to create the beer with greater complexity than the earlier versions.

The wisdom of continuing to tweak were seen at the 2016 Australian International Beer Awards when the Hopinator scored gold in the popular IPA category.