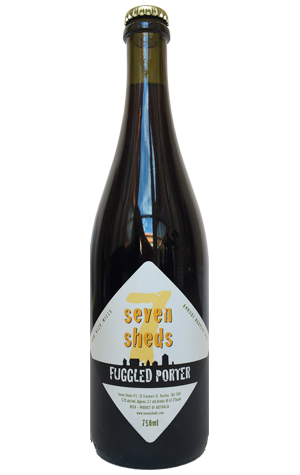 What was intended to be a double batch of Stark Raven became the first batch of Fuggled Porter when Willie discovered while mashing in that he couldn’t fit that much grain into the mash tun. In a beautiful coincidence, Seven Sheds had just completed its annual hop harvest so a new black beer was created quite literally “on the hop” and has been a part of the hop harvest lineup ever since.

The first batch was sent off to traverse the Bass Strait over and over on the Spirit of Tasmania to recreate an epic beer journey, which you can read about here. The subsequent beer is a "roasty, robust porter" built around the Fuggle hop flowers grown and hand-picked at the brewery in Railton. Continuing the brewery's uber-local approach, the backbone of this brew is Tassie-grown barley, malted nearby at Quoiba. According to brewer Willie Simpson, the addition of roasted barley, crystal and dark malts "provide toasted, tarry characters in this "complex, dusky brew".