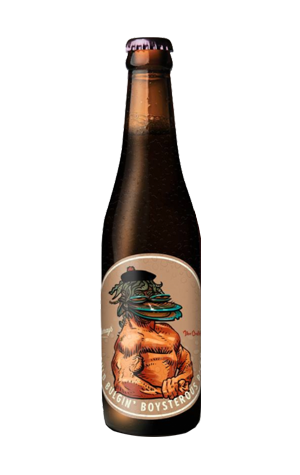 We've said plenty about this beer created in collaboration with Murray's so won't say much more here. What's more, as it's kind of our beer it would be wrong to say much about it anyway. That's part of the reason why we've decided to run a little competition inviting you to review it for us in 50 words or less, with the best and most entertaining received by August 9, 2013, winning a t-shirt.

What we can say is that it's a 10 percent ABV Smoked Belgio Imperial Mussel & Oyster Stout featuring heaps of Port Stephens oysters, blue and green-lipped mussels, peated distilling malt and a Belgian Trappist yeast. And that the early responses to have come in since it was tapped at the brewery and the Murray's bar in Manly on July 6 include "awesome", "the best stout I have tasted", "masterpiece" and "beautiful". All of which is good to know, especially for something that started out as a bit of fun for last year's Beervana NZ.

NB: At its Victorian launch, we were asked if it would be brewed again. We said: "Hopefully." The brewer said: "No." Goddammit!