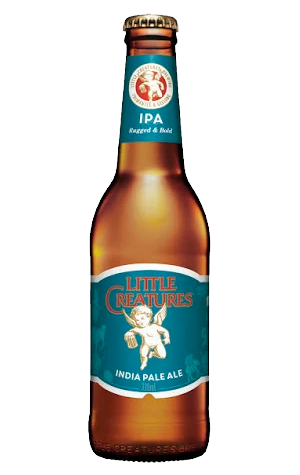 Such has been the regularity with which Little Creatures has released its Single Batch beers, it might come as a surprise to know that, prior to the release of this IPA, it had been fully seven years since the release of the last permanent beer in their range. But now you can add an IPA to the stable that began with the Pale Ale (originally called "Live"), Pilsner, Bright and Rogers'.

In their own words, the idea was to give lovers of their Pale Ale "a little more" and they've done just that. After leaving its British Racing Green covered bottle (since changed to blue), the beer might look similar in your glass to what we can now call its little brother, albeit marginally deeper in colour, but you don't have to get too close to realise it's definitely bigger. Hops from the UK (East Kent Goldings), Australia (Victoria's Secret), New Zealand (Southern Cross) and the US (Amarillo) create a welcoming blast of tropical and citrus aromas, with a touch of spice and sweet caramel malt in there too. There's plenty to get your teeth into - all in the well balanced Little Creatures manner, of course – with enough bite to provide avowed hopheads with an IPA they can happily sit on but not so much that those venturing into IPAs for the first time are frightened away.