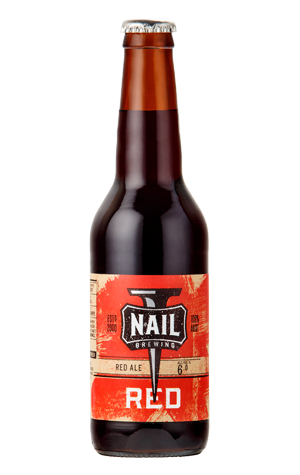 Having become increasingly convinced that Nail's founder John Stallwood is Australia's maestro of malt on the back of staggeringly consistently high quality releases such as his Oatmeal Stout, Hughe Dunn Imperial Brown Ale, Imperial Red Ale, Imperial Porter and Clout Stout, we expected this Red Ale to be another exploration of just how much character and depth could be expressed in a beer via the mastery of beer's backbone ingredient. So imagine our surprise when the first thing to hit us as the blood orange drop hit the glass was a wave of fruitily aromatic hops.

In hindsight, the "Double Dry Hopped" note on the label should have offered something of a clue... Certainly, the hops play a more dominant role here than in anything other than the Golden Nail, with US variety Citra and a couple of Aussie varieties offering up heaps of tropical and citrus aromas as well as palate-tickling fruity flavours alongside the rich caramel malts. It's full-bodied yet surprisingly light on its feet for 6 percent and set to win the hearts of those pining for Goat's recent India Red Ale. As always with the Brew Log beers it is dedicated to someone who has played a crucial role in the Nail story, this time the late Maurice Brockwell who invited John to set up Nail Brewing at Bobby Dazzler's in Perth's CBD last decade, helping establish the then fledgling brewery.

NB This proved so popular that it went on to become part of Nail's core range and has collected a swag of medals and trophies along the way.