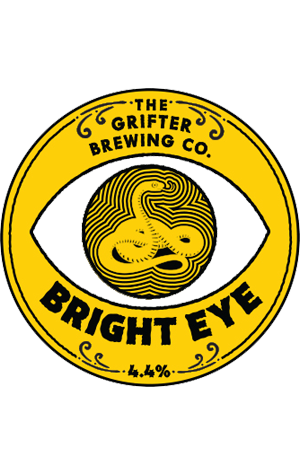 Even the most ardent beer geek would have to admit there are times when you couldn’t care less if a beer is barrel-aged, wild fermented, spice-infused or a collaboration with your local hairdresser. More hops? No thanks. Sometimes you just want a bloody beer, mate. No fuss, no extras. In truth, that’s probably what most people want most of the time – it seems to work pretty well for the multinational brewers. Now, given that context, should it surprise you to hear the boys at the Grifter Brewing Company became mainstream sellouts by brewing a four percent lager? Of course it shouldn’t. But, of course, they haven’t. What they did do was put their own take on a session beer. Called Bright Eye, it’s a beer several months in development with the key criteria being pretty straightforward in that it had to be (1) really approachable, (2) really tasty and (3) really easy to brew (apparently 17 hour brew days like those necessary to produce their Big Sur IPA aren’t as much fun as they sound…).

The way they ticked those boxes when the beer was first released in late 2014 was by brewing a little outside the box. Where the general rules of brewing dictate that lagers are fermented cold and ales are fermented warm, Bright Eye used an ale yeast but fermented cold – think along the lines of Kolsch, steam ale or similar hybrid beer. That cooler fermentation has gave the ale clean and crisp lager characters – even the brewers were surprised by just how much of a difference it made – while a generous amount of Czech Saaz and Australian Summer hops helped keep it feeling bright and fresh. By blending a bit of mainstream theory with some craft brewing cred, it became a no-fuss feel-good hit. Once they were able to start brewing in their own brewery, further tweaks were made to the recipe and Bright Eye became, officially, a pilsner.