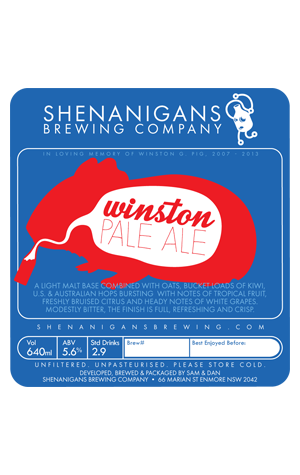 If the ultimate measure of a beer is whether you like to brew it and love to drink it, Winston is something of the Shenanigans brewers’ perfect beer. As is the case with everything they create, it doesn’t fit neatly within any style guidelines although, if you had to choose, it probably sits most comfortably in American Pale Ale territory. That’s largely based on the hops - Australian, New Zealand and USA varieties - which fair explode out of the glass with aromas of tropical fruit. Those balance delicately on top of a light malt base which has had oats added to give a pale appearance and a slightly fuller mouthfeel. Winston is an extremely satisfying beer - the kind that most anyone, be it a beer geek or otherwise, who’s poured a pint would enjoy and be almost certain to go back for another.