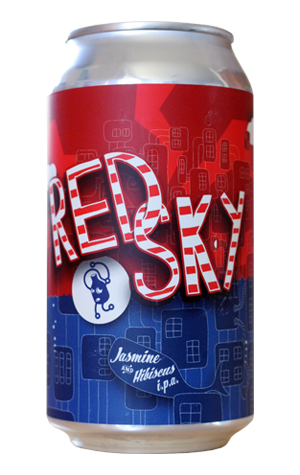 It’s always nice to hear about businesses listening to their customers. For the 2014 Sydney Craft Beer and Cider Fair, the Shenanigans brewers pulled out three new test recipes for punters to try. The first was an Imperial Black IPA, the second was an Oatmeal Stout bristling with chilli and the third was a jasmine and hibiscus infused IPA. It was the last of these that proved a huge hit and convinced them to brew a full size commercial batch.

The Red Sky IPA is inspired by a beer from the States, but is one that’s been hopped with both Australian and USA varieties. Appropriately for a beer that was released in spring, the floral aromas and flavours – aided in no small part by the jasmine – are abundant. As for the hibiscus, that helps give the beer a lively red hue and contributes towards a refreshing and slightly tart finish.

Update: this beer has become an annual release and, as of 2017, is available in cans too – see here for more.

And other select NSW venues