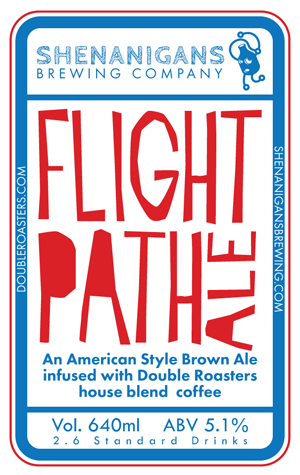 It didn’t take long for Shenanigans to catch the collaboration fever that’s swept the brewing world. For beer number three from their stable, they teamed up with the Marrickville coffee experts at Double Roasters to create a coffee-infused American-style Brown Ale. Just as the creation of the beer is a blend of two companies, this beer’s flavour can be bundled into two reasonably distinct profiles. The first is the darker malty side, whose biscuity, chocolate and even caramel notes grab you warmly around the tongue and hang on tight. The second is the fruity side, coming from not only the Australian and USA hops but also from the coffee whose impact also seems to be helping the flavours zip sharply around your mouth. Brewed directly beneath the approach route to Sydney airport, Flight Path is a fine example of what can happen when local brewers of different kinds get together.