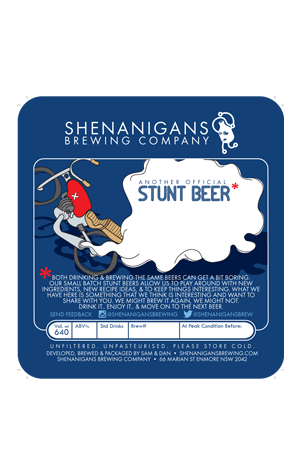 Any beer bearing the Shenanigans label is likely to cause a few heads to turn. But when they announce a new series of limited releases under the banner of ‘Stunt Beer’, you’d be forgiven for keeping an eye out for flaming motorcycles flying by. To begin with, this is a porter. But then it’s given some extra special treatment by way of oak. Not oak barrels - anyone can do oak barrels - but oak that’s been soaked in rum; proper pirate-like stuff. That in itself is rather appropriate considering the inspiration for this beer was the band of merry sailors who formed part of the first European settlers to New South Wales and who used rum as a form of currency. When you add to that a handful of spices and a sprinkle of chilli from brewer Dan’s garden, this is a beer with more layers than a galleon and should be enjoyed like a night on shore leave; slowly, to make the most of every moment.