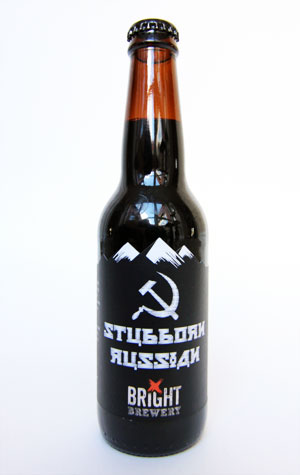 The quality of beers he was releasing pretty much from the start of his time at Bright suggested young brewer Jon Seltin was one to watch. But it was on a visit to the brewery a couple of summers ago and a chance bumping into Jon (who was supposed to be on holiday but clearly couldn't keep away) that the attention to detail, creativity and ambition became apparent. Among the toys and experiments he unveiled was a barrel filled with a "stock ale", a type of beer originating in 18th century UK that would be strong and malty then often left to mature for months in barrels to take on oxidised and sour characters. Jon planned to leave his to take on these normally unwanted characters for years before blending it into other brews.

Fast forward to today and a portion of said stock ale is making an appearance within this year's Stubborn Russian, the brewery's Russian imperial stout. The beer was already a cracker, offering depth within its jet black body in previous years. The new experiment seems to have added even more, with a touch of both lactic sourness and a tannic dryness apparent, presumably picked up from the barrel-aged stock ale. They crop up alongside the typical RIS characters – roast, dark chocolate – but also some not seen so often, such as the tar, ashtray and leather found in beers like North Coast's epic Old Rasputin. And, while we haven't done a side by side with that beer, it is the one that came to mind at first sniff and sip of this year's Stubborn Russian, which suggests that Jon's concocted yet another winner.