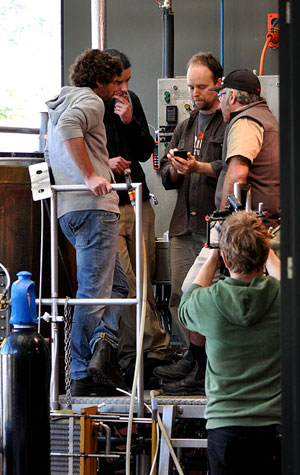 The beauty of a beer writer joining a brewery in a marketing role: they love the opportunity to exercise their writing talents. Case in point is James Davidson, former Beer Bar Band blogger and Brews News contributor now ensconced happily at Bright Brewery in the Victorian High Country, which hosted the second High Country brewers collab brew earlier this year and sent us through the story of the day.

He tells us: "Last year the High Country Brewery Trail started a new initiative by collaborating on an annual limited release brew called ‘Rule 47’ (a reference to The Velominati’s rules of cycling – “Drink Tripels, don’t ride triples”). The inaugural release was a hoppy Belgian style strong ale brewed at Bridge Road in Beechworth." This time around the four brewery representatives, Pete Hull (Sweetwater), James Booth (Black Dog), Steve Matthews (Bridge Road) and Jon Seltin (Bright) moved from tripel to an "India Pale Wit", which James says "has been made up from a 45/35 ratio of pale and wheat malt, along with some other specialty grains. It has been hopped predominately with the new fruity Enigma hop, plus some Summer hop, and run through a hop back packed with a yet to be named experimental hop from Rostrevor.

As for the day, James says: "When asked what they enjoy most about the High Country Brewery Trail brew days, the response from all the brewers was uniform: they love the opportunity to play on a different brewhouse, learn from each other and most of all, just have a chance to catch up with their local brewery mates. Each of the breweries has been so busy over the last 12 months that it has been a long time between drinks. And drinks was how the day ended, with all brewers happy with the result and eager to kick back on a sunny day in Bright."

As for the beer, which is on tap now at all four breweries and in good bottleshops further afield too, it has an enjoyably complex aroma, with the yeast and hops doing battle with each other and throwing out peppery spice, herbal, floral and soft fruity, melon goodies, while under its foamy white head, there's a broad palate of fruity flavours in a hazy pale golden beer that finishes both very dry and refreshingly bitter.

On tap at all four breweries