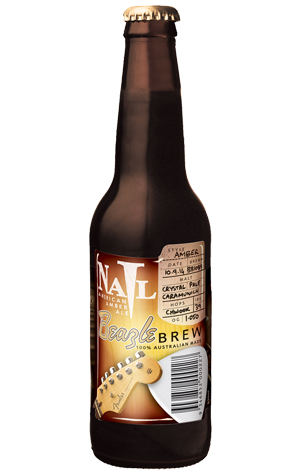 For a man who used to brew only a couple of beers all year round, Nail's John Stallwood is certainly keeping us busy with new releases these days. As well as the core range, he's been sending beers out under the Brew Log moniker every few weeks, has an ever-growing lineup of imperial beers and is starting to line up some, such as the Hughe Dunn Imperial Brown and this Beazle Brew as annual releases.

The Beazle is another beer dedicated to someone in John's life, this time around Daniel Bell, a member of the family behind Heron Towers, Nail's distributors, who passed away aged just 21 last year. The beer created for him is a hoppy American Amber that pours a cloudy rusty colour, emits a blast of spicy, piney aromas from the liberal use of US Chinook hops and follows it up with a mouthful of biscuit and caramel malt flavours, not to mention a definitely full stop kind of a bitterness.

Nationwide at good bottleshops and bars