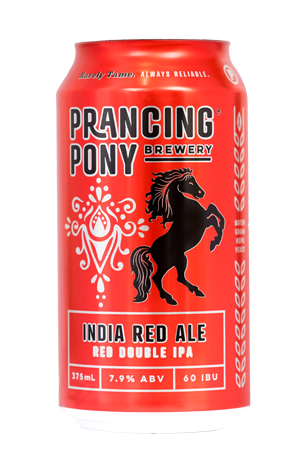 The first beer to appear under the Prancing Pony special release range called Thoroughbred was also the first beer to start a buzz about the brewery among beer aficionados in their home state. The India Red Ale is a no-holds-barred beer that ramps up the malt profile (initially making full use of their much-loved "fire brewed" caramelisation before they switched to their state-of-the-art German brewhouse) and the hops in equal measure. Frank's inspiration came from wanting to combine a New World IPA with an "American Imperial Double Red Ale" (trying saying that after a couple of them) and resulted in this full-bodied offering.

It made the pages of the two books this site's founders has written on Aussie beer, thanks to its deep red colour and dense, lingering head that coats the glass. Tropical, herbal hops merge with caramel atop a full-bodied beer with enough biscuity, toasty malt to carry off the high level of bitterness.

It's gone on to win a Supreme Champion trophy at the International Beer Challenge in London and remains the brewery's biggest seller despite its not inconsiderable heft.