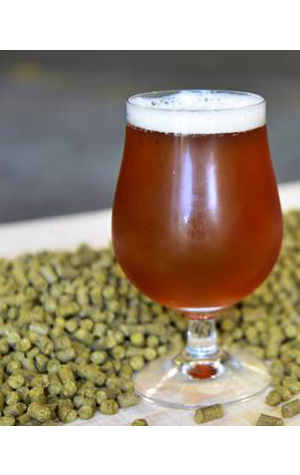 It looks like Hargreaves Hill is on a mission to give Mountain Goat a run for its money in the "Who can brew the most different IPAs?" stakes. That said, other than the 2012 GBW collab with Nogne O and Moylan's (the devilishly bitter Imperial Black IPA Our Dark Secret of which we have one bottle left...), they've eschewed any temptation to brew anything other than a "pale" IPA. The latest is in keeping with that tradition, is called Zenith and, once again, has brought some beautifully florid prose from head brewer Kai Dambergs. So we won't even bother editorialising but instead hand straight over to him...

"Heady, ripe fruit aromas from a sneaky tickle of Citra in the bright beer tank cover resolute qualities of pine, mandarin and resinous goodness from generous fermenter and late-kettle additions of Simcoe and Chinook," he says. "Vienna, biscuit and crystal specialty malts weave a rich tapestry around the generous hop flavour & aroma. Bitterness arrives fashionably late; shortly after the glass is gone, but just in time for another!"

UPDATE 23/01: A second batch of Zenith is out, with a slightly lower ABV (6.5 percent) and Citra swapped for Summit.