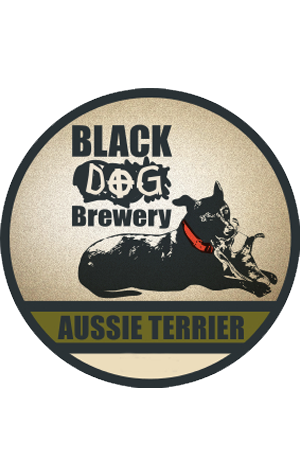 In between making all of the wine at Taminick Cellars, James Booth has spent the past few years creating beers under the Black Dog banner. Having launched on a 70-litre home brew setup, he's now the proud owner of a shiny, Italian made 18 hectolitre brewery and has established a loyal band of followers who believe the quality of his beers deserve a bigger following. One suspects that beers like this Aussie Terrier, one of the finest of his brews we've tasted to date, should help.

There's already an IPA in Black Dog's permanent range; this one comes in slightly lower in alcohol but stands out more through its use of all-Aussie hops. In fact, you could almost say it uses all of the Aussie hops. The lineup begins with Super Pride for bittering at the start of boil, before moving on to include Galaxy, Ella, Vic Secret, Cascade, Topaz and Enigma at various points throughout the late kettle additions, whirlpool and dry hopping. It might sound like a recipe for disaster, one in which too many hops to spoil the broth, but the beer is instead a enticingly aromatic, smooth-on-the-palate, balanced, fruity affair in which all manner of tropical fruits and softer melon flavours sit just so with the soft malts for your easy-drinking pleasure.

Bottles coming end of November at: