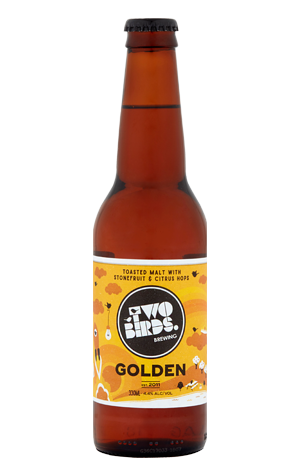 Where it all began the Birds. Having taken her leave from Mountain Goat to embark on what's turned out to be a rather successful venture with Danielle, Jayne's first beer was both a safe first step and one that epitomised the approachable side of her ethos. It was ale fairly prescient too, for while there are dozens of local brewers with golden ales on their rosters now, back in 2011 they weren't nearly as common.

The beer itself is pretty much the baseline for what to expect from a contemporary Aussie golden ale: a slightly sweet, almost honeyed, grain character from the use of ale, Vienna and wheat malts and a soft, fruity hop aroma from a combo of Motueka and Summer create an easy drinking ale that's proven so popular they've even brewed a real ale version of it for a festival in the UK.

UPDATE 2019: Following a continued decline in the style's popularity and sales, Two Birds removed Golden Ale from their core range.