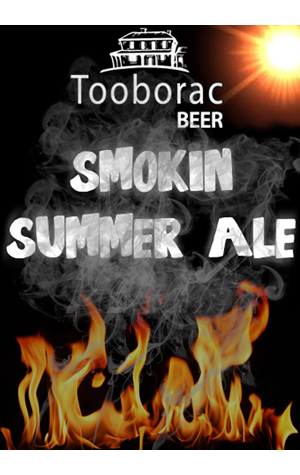 If first impressions are anything to go by, the future is bright for the first limited release to emerge from the recently installed new brewery at Tooborac. The Smokin' Summer Ale's first exposure to the public came at the 2014 Bendigo Craft Beer Festival, where it took out the People's Choice title as Best Beer of the Festival.

We're told it's a light bodied, refreshing summer ale, but one with much more going on than those words may initially conjure. Look out for an initial smoke character imparted by specialty cured malt that was smoked on manuka wood chips, some spice from fresh galangal, a touch of Victorian bush honey and a floral hint from Kiwi Motueka hops.

According to Tooborac's Beer Dude: "Smokin’ Summer Ale is a lovely beer on its own, but matches perfectly with summer flavours off the grill." Hence why when it makes its Melbourne bow at the Edinburgh Castle Hotel in Sydney Road, Brunswick, the chef is concocting some suitably beer-friendly dishes in the form of Southern USA style BBQ. You can drop into the launch from 7pm on November 21. We'll update this with other stockists once we have them.