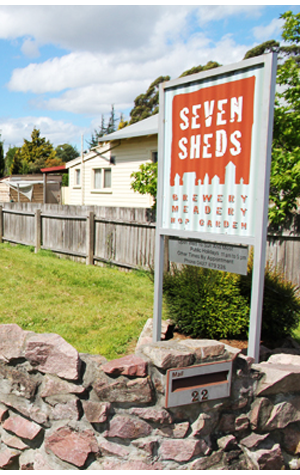 Seven years into brewing at their home and hop farm in Northwest Tassie, Seven Sheds has created its first saison. And, once again, it's a beer in which Willie Simpson and his brewing team has made full use of local ingredients.

Among the fruits of their surrounds to be featured in the beer are locally-grown lemongrass and lemon zest, spelt and oats from Kindred Organics, as well as locally malted barley, plus Aussie Ella and Kiwi Motueka hops and, for good measure, a dose of raw ginger.

It was debuted at the last HOPS beer appreciation event of 2014 at the New Sydney in Hobart, where it proved the most popular drop on the night. It's "flavoursome and dry" and is the precursor for a collaboration with the New Sydney crew in December. We're told they're "creating something no one would expect Seven Sheds to be making (and we’ve been telling the world since we opened that we wouldn’t ever brew this particular style…)."