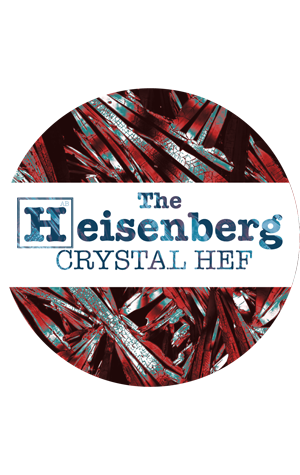 It's not blue, it won't keep you up for days on end and you won't get in trouble with the feds for indulging, but the Australian Brewery's latest seasonal release is still a rather smart play on Breaking Bad. The beer is inspired by southern German wheat beers – aka hefeweizen – and also uses a fair amount of Crystal malt, which can add a deeper amber hue and caramel flavours to a beer, among a plethora of other grains. Hence Crystal Hef. Hence Heisenberg.

It's a draught-only release described as "spicy and aromatic", thanks to the yeast and combo of Old and New World hops, with a "deeply addictive maltiness" that head brewer Neal Cameron suggests you try pairing with Jamaican jerked chicken (namely the Jamaican Jerked Chicken Burger they serve at the brewery that's on the photo, but we assume that if you can't make it to Rouse Hill, any Jamaican jerked chicken should be worth a pop...).