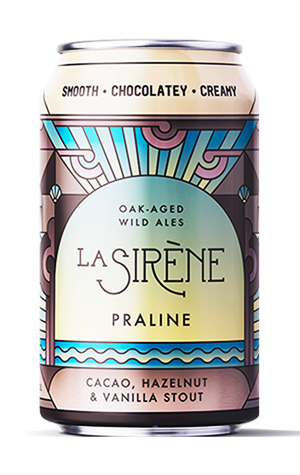 The surprise hit of 2014? The Praline was the beer Costa Nikias conceived for the year's Great Australasian Beer SpecTAPular at the Royal Exhibition during Good Beer Week, an event that sees more than 100 brewers come up with something brand new. Of the 100-plus beers of all shapes and sizes tapped in 2014, the Praline was the one that drinkers loved the most, taking out the People's Choice title. Since then, it's been regularly brewed and, almost without fail, tends to have pre-sold out before bottles even arrive at bottleshops.

At its base, it's a Belgian style stout upon which Costa goes to town. At various stages in the brewing process he adds organic vanilla pods, cacao nibs from Mexico and hazelnuts. The result is a beer with an aroma more decadent, velvety and luxurious than any other we could recall at the time. All of its various aspects come through, from the toasted hazelnut character that lingers at the end to the rich, creamy choc-vanilla aromas with which it opens, creating a beer of rare opulence. One with which to hit people who insist they don't like beer, for sure.

NB After deciding to replace Praline with a sour version brewed with their house yeast, La Siréne backtracked a little in winter 2020 and gave fans of the OG their beer back, but in cans instead.