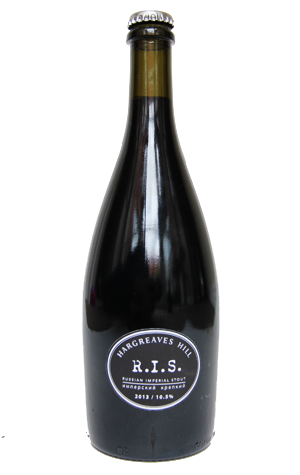 A wee bit of the 2013 iteration of the biggest hitter in the Hargreaves Hill stable has snuck out in draught form in the past but the brewery's 10th birthday celebrations were chosen as the moment to finally allow the bottles, which have been conditioning in the brewery for several months, to head out into the world. First, a little history. The first R.I.S. (Russian imperial stout) from the Yarra Valley gang was released in 2011 and promptly snapped up a gold at the following year's Australian International Beer Awards (and the few remaining bottles of it are currently pouring a gleaming, viscous treat of sweet liquorice and Vegemite). It's been brewed twice since, with the 2013 vintage the latest.

At this (relatively) early stage in its existence, the R.I.S. is presenting pretty softly, with smooth sweet chocolate, coffee and a touch of liquorice to the fore before the combination or roast malt and English hop bitterness comes into play. The brewers reckon it would make an excellent after-dinner match for an "authoritative blue-veined cheese or a little good quality dark chocolate". What's for certain is that we'll be sure to use "authoritative" next time we're at the local fromagerie...

Bottles at linked venues plus: