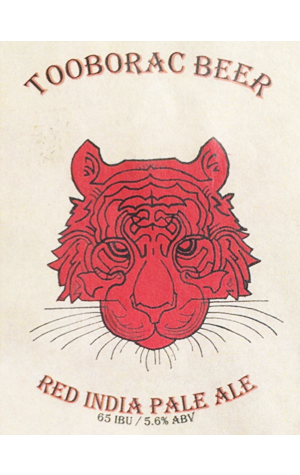 While 2014 may have been the year in which saisons came to the fore and beer geeks rejoiced at the growing number of sours and wild ales on the scene, when it came to looking at the best new brews nominated by the Crafty Pint's state-by-state pickers it was variations on India red ales that cropped up more than any other. Perhaps it's little surprise that the style should be so appreciated; when done well it is essentially a meeting of lots of hops and lots of flavoursome malts. As we once wrote many moons ago of 8 Wired's Tall Poppy (one of the first and still among the finest Antipodean takes on the style), it's a beer that other beers want to be when they grow up.

And now there's another one on the market as Stu Ritchie, head brewer at Tooborac Brewery, continues to flex the muscles of his new toy, the 1200 litre brewery picked up from Wellington's Garage Project. The draught only Red IPA was debuted at a couple of beer festivals late in 2014 and is now appearing on a few taps around Victoria. In keeping with the style, this ruddy coloured beer leaves little in the locker room, with piney hops battling with heaps of dark caramel and toffee aromas and a powerful thread of resinous hops running through the palate and leaving a lingering bitter aftermath, topped up with a toastiness from the malts too. Has to be the biggest flavour explosion to leave Tooborac to date.