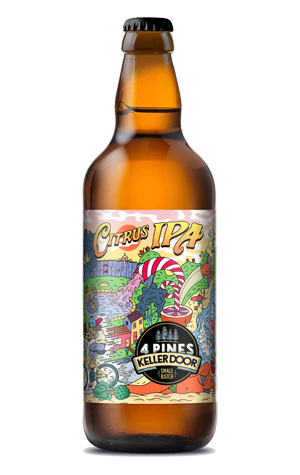 Thanks to the hop growers of the Pacific Northwest and Sierra Nevada Pale Ale, the contemporary beer world is awash with tasty beers in which citrus characteristics are prominent as all hell. So the team at 4 Pines – whose existing Pale Ale is one that has plenty of a citrus bent going on – has decided to attempt to enhance the characteristics typically obtained from hops by using actual citrus fruit in its latest Keller Door limited release brew.

The Citrus IPA continues to follow the path trodden by their last Keller Door beer, the 8 percent Imperial India Brown Ale, by aiming as high in the booze stakes as it does in the flavour and aroma stakes. Tipping the scales at 7 percent and packing 60 IBUs of "aggressive bitterness", the brewers reckon the addition of fresh blood orange, grapefruit and lime gives it a "slight mouth-puckering zestiness" too.

There's a change of direction with the packaging, with the formerly traditional and stoic labels consigned to history in favour of a rather lunatic cartoon recreation of summer's past via the means of those mushrooms your parents warned you off.

And nationwide at good beer venues in 500ml bottles