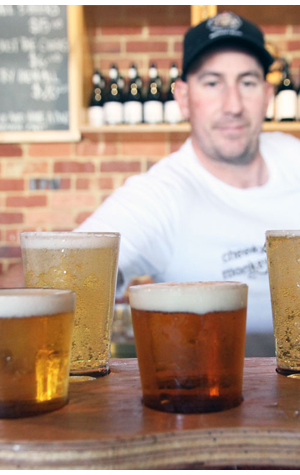 On The Crafty Pint's first visit to Cheeky Monkey in the Margaret River just before it opened, we managed to steer our poky hire car over one of the saplings freshly planted in the car park. On a second visit at Christmas 2014, we were relieved to see the car park trees flourishing and, more importantly, the brewery and venue absolutely cranking too. WA tends not to do things by halves when it comes to microbreweries and that's certainly the case at Cheeky Monkey, which had drawn a crowd in the hundreds before the clock even hit midday.

And it's with such large and thirsty crowds in mind that brewer Ross Terlick (pictured) concocted a new addition to the brewery's core range. The Blonde Capuchin is a summer ale in every sense of the word: it's relatively light in body, with gentle malt sweetness and an appealingly soft, melon like hop aroma that's enticing without smacking you in the chops. And the last of these characteristics comes from the rather underused Aussie hop Summer, a variety that's a world away from the big hitters like Galaxy but which can make for subtly alluring beers. The bitterness is gentle, there's a refreshing tang from the use of wheat and, in all likelihood, it's a beer that will join their pale ale in draining from the tanks faster than the brewers can fill them up.