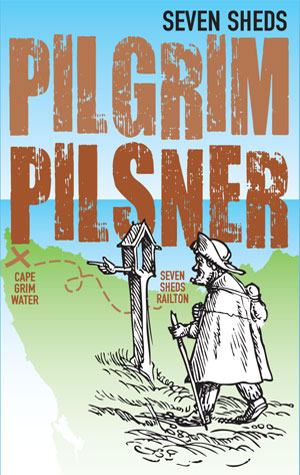 One thing you're almost always guaranteed when a new beer appears from the Tasmanian brewery of beer writer turned brewer Willie Simpson is that you're going to learn something. The beer may be brewed to mark an occasion, feature unusual local collaborators, or be an attempt to recreate a classic style from the past – no matter the lengths this means going to. And the Pilgrim Pilsner is no different, even coming with a personal tale to boot.

Let's start with the personal. Many times over the years, Willie has told people : “Seven Sheds will never make a lager as long as my backside faces south.” Yet tomorrow his cellar door and the New Sydney in Hobart will see the launch of just that: a Seven Sheds lager, although he insists: "My posterior still points to the Antarctic."

So how and why did this happen?

In December, Willie and partner Catherine Stark headed to the source of Cape Grim Water, arguably among the purest on the planet as this remote rain farm only collects rainwater when the wind direction is from the southwest so the precipitation in the air has had no contact with anything human for thousands of kilometres. Now that is dedication to the cause. Indeed, the resulting water is soooo pure that it actually contains less dissolved minerals than that of Pilsen, the Czech city from which pilseners originated thanks to its crazily pure water.

So being a brewer fascinated by beer's history, what was he to do? Drink his words, of course. He did so by transporting 1,500 litres of water back to his brewery to brew the beer with "help and hindrance" from the New Sydney crew. They did so with mainly Tasmanian pale malt, a touch of Aussie Munich malt and a combo of Czech (Saaz) and Kiwi (Motueka) hops. Only 600 individually numbered bottles and a handful of kegs have been produced. We're getting our order in before this listing goes live...