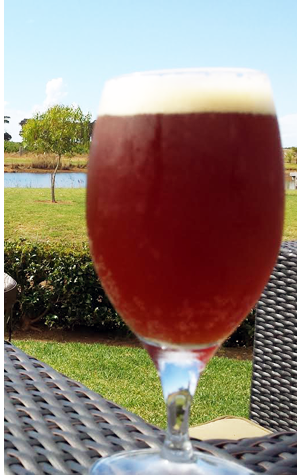 Having spent a couple of hours in Cheeky Monkey head brewer Ross Terlick's company over the festive period, it's a wonder he gets anything done at this time of year. The brewery venue in Margaret River's popular Caves Road attracts so many guests the core beer tanks empty so fast it's like they've sprung a leak.

But somehow he's found the time to add to the brewery's growing list of specials they release under the Southern Wailer banner. The Extra Special Belgian is as you might expect from the title: part English style Extra Special Bitter (in other words, a rich, malt-led dark amber brew), part Belgian thanks to the use of the brewer's house Belgian yeast strain that's found in its flagship Hagenback Belgian IPA.

Ross calls it a case of "English sensibility meets Belgian flair" and tells us: "Using a blend of English and Belgian malt and hops we have created a beer with a toffee and honey malt backbone with a spicy, cleansing hop bitterness. Our Belgian yeast provides aromas of banana and pear with a hint of bubble gum."