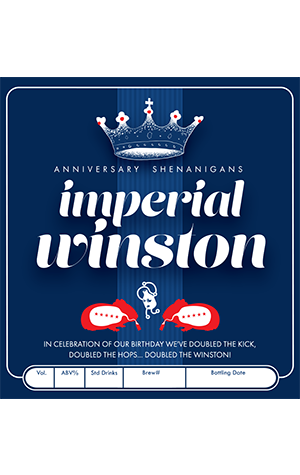 Winston, Shenanigans’ pale ale and only regular release, impressed a lot of people in 2014, ending up on several ‘Best of’ lists (including ours) and putting in an impressive debut showing in the Hottest 100 Australian Craft beers poll. Perhaps as something of a reward, it’s now been given the royal treatment.

Imperial Winston isn’t so much a reworking of the original, but rather a literal doubling: twice the amount of hops have been used, which is quite a lot when you consider how hoppy original Winston is. That means Winston the Second is a very big and bold beer rammed full of tropical fruit character, particularly grapefruit and citrus. At a hearty 9.1 percent ABV it certainly packs a bit of heat, but that’s neither unexpected or unwelcome. Getting the most out of a beer like this requires drinking it fresh, so you’ll want to get along to the official launch at Shenanigan’s first birthday event on February 28 as part of Craft Beer Rising 2015.