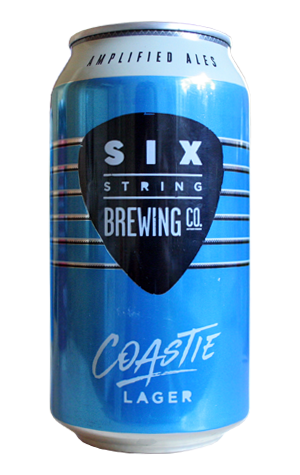 For Australia Day 2015, the team at Six String Brewing decided to launch a version of that oh-so-Aussie beer style: lager. They originally planned it as a proper local lager, keeping its availability strictly confined to the Central Coast but, such is the nature of these things, it proved popular so they relaxed the beer’s boundaries a little, then a lot. And who can blame them; the style was chosen because it’s something that will go down well with those pursuing a coastal way of life, and Australia is hardly short on coastal dwellers.

The beer itself uses Summer hops designed to give aroma of melon and lemon myrtle while a touch of dry hopping with the same variety gives a slightly sweet finish that complements a breadiness from the malt. At 5 percent ABV and a mere 12 IBUs of bitterness, it's pretty easy to imagine what this beer is like and the sweet spot it can hit as you pull up to the bar having spent the day in the sun. And, since they popped it in cans and sent the beer far and wide, you can bet that it's hitting a lot of sweet spots.