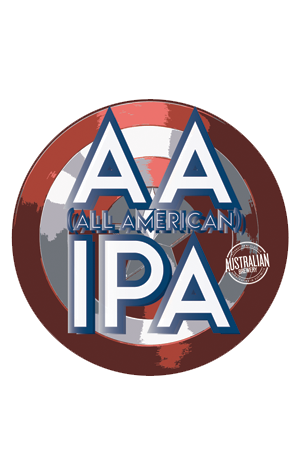 It was unusual, considering how much Australian drinkers love their fresh, punchy and hoppy beers, that The Australian Brewery declined to brew any form of New World IPA for so long. Perhaps even more so that, when they did finally relent in 2015, they opted for a Session IPA. But they had good reason as the original version of this beer was constructed in consultation with some Sydney bartenders who were after a post-work quencher in the realms of an IPA but without the accompanying high alcohol. In that regard, they would've be pretty pleased with the beer they got.

Called the AAIPA (All American India Pale Ale) upon its original release (complete with Captain America-inspired artwork), it was a reference to the all American hops – Mosaic, Centennial, Columbus, Cascade and Amarillo – that were added, once in the brew and twice dry-hopped. That first beer you might've called a gentle IPA, with its piney and resinous fruity punch being delivered with gloves rather than bare knuckle brute force. It's since been tightened up in the flavour department, with an extra dry hop addition and tweaking of the malt to better balance the high bitterness. Now renamed the All Star Session IPA, it's a beer that does a better job of flexing its muscles and showing off its robust side while still maintaining that small 4.3 percent ABV package.