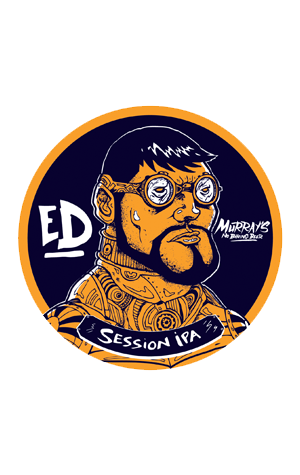 When Fred, Murray’s take on a West Coast American IPA, was released mid-late 2014, it plugged one of the very few gaps in the IPA style spectrum that Murray’s hadn’t brewed via its use of US instead of Kiwi hops. Well, it seems they’re now determined to plug every gap because hot on the heels of Skully – a Red IPA which was as delicious as it was limited in supply – comes Ed, Fred’s younger cousin. Ed is, goes the official description, “not quite as grown up, but just as brash”. In other words, it’s a Session IPA.

Given "session IPA" as a term is not just debated for its validity but also open to interpretation by brewers, some of whom believe the aim is to head sub-4 percent, others who don't, it's worth clarifying that Ed is in the latter, bigger camp at 4.5 percent. (NB: If you’re a stickler for style guidelines, you mightn’t want to know that brewer Graeme Mahy reckons Ed is possibly more of a hopped-up APA than a Session IPA). So now that’s cleared up (sort of…), what should you expect from the beer itself? It's had Australian pale and crystal malts used to add a light sweetness that balances out the Citra and Cascade hops. Those hops are plentiful and give aromas of orange peel, melon and tropical fruits making Ed, in essence, a more sessionable version of Fred.