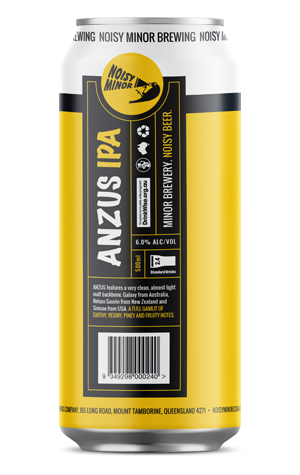 When it came to putting Fortitude Brewing's noisier sibling brand on the map, it was this beer, the ANZUS IPA, that led the way. Sure, there were (and still are) plenty of fans for the likes of Admiral Ackbar, but this beer built upon a blend of Aussie, Kiwi and American hops back when IPAs were still clawing at the backdoor, seeking wider acceptance, was the noisiest of the Minors, even cracking the top ten of the Hottest 100 Aussie Craft Beers poll in 2014.

A US-inspired IPA Initially crafted to "honour the ANZUS treaty between the great (hop growing) nations of Australia, New Zealand and USA", it put the hop growers' wares to work over the leanest of malt backbones. Now available in the brewery's striking yellow tallboy cans, it seems to have gained a slightly darker hue over the years – just slightly, mind – with some sweet, almost creamy malt characters joining the army of New World hops. But it's the latter that remain key, delivering on the ripe citrus, piney and resinous front and bringing up the rear with a bitterness that's present without being intense.