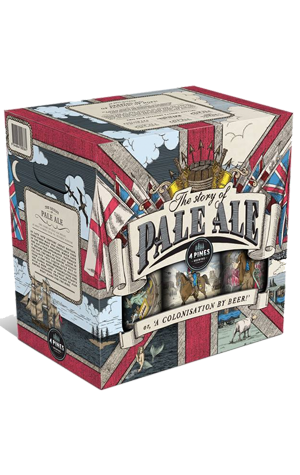 One can never accuse the crew at 4 Pines of lacking ambition. They've rapidly grown to become one of the biggest craft breweries in Australia and have managed their growing pains so well their beers continue to win trophies, all while maintaining a sense of joy and mischief. And now they've released their most ambitious Keller Door release to date. Not content with releasing one new beer, they've conjured five that are being sold in eye-catching, no-expense-spared six-packs following their launch on tap at a handful of venues across the country.

The Bastard Children of the British Empire – AKA The Story of Pale Ale – sees them look to educate drinkers about the evolution of the pale ale style from its earliest incarnations in the UK through to today's multitude of different variations. Each bottle, from Bastard One through to Five (beer six is their regular Pale Ale), comes with a colourful tale about each particular style and its origins, as well as tasting notes. The five new bastards are:

English IPA – 6 percent and 47 IBU – a distinctive woody and earthy drop, "like the inside of a sauna" in terms of its woodiness according to one fellow taster.
American IPA – 6.3 percent and 70 IBU – that's not as punchy as one might expect on the nose but has heaps of citrus marmalade and resinous hop flavours.
NZ Pale Ale – 4.5 percent and 29 IBU – a smooth and mildly aromatic pale that's clean, light on the palate and easy-drinking.
Aussie Pale Ale – 5 percent and 32 IBU – very pale in colour with light fruity esters from the yeast and a touch of fruity hop character too.
Belgian Pale Ale – 5.6 percent and 19 IBU – possibly our favourite of the five, along with the English IPA, this is a smooth and balanced meeting of rich malts and those distinctive fruity, softly spicy Belgian yeast-derived characters.

As history lessons go, they don't come much more rewarding than this.