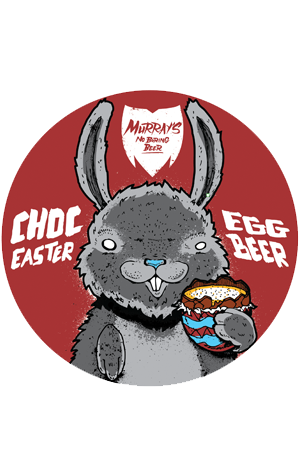 Every Easter weekend it’s become tradition for Murray’s to open their Port Stephens brewery up to a mini festival of blues music, brewery tours and an Easter egg hunt through the venue’s vineyard and surrounds. They also use the occasion to release an Easter beer. Most recently that’s tended to be some variation of a spiced ale which recreates many of the cinnamon and other spice flavours you’d expect from Easter’s ubiquitous hot cross buns. But for 2015, new/returning brewer Graeme Mahy has mixed things up a bit and aimed for the other typical Easter fare: chocolate. And so we have Murray’s Chocolate Easter Egg beer.

Prior to its release, we’re told it’s been made with six specialty malts, cocoa nibs, vanilla beans and cold conditioned for two weeks. The characters you should expect from that are of bitter dark chocolate with a slight vanilla sweetness, with the bittersweet chocolate also coming through in the aroma. Alongside the beer’s release, those at the Easter festival will be able to enjoy the dish Murray’s brewery kitchen has come with to complement it - or should that be push your limits of indulgence: a southern-fried chicken, cheese and maple bacon donut sandwich.