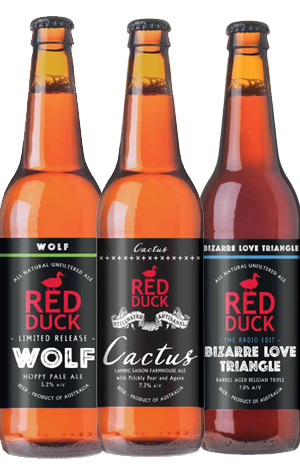 If we told you that a brewery was releasing three new beers at once with five more to follow in a few weeks and another half a dozen after that, we reckon you'd have a pretty good stab at guessing which Aussie it was. If we mentioned that among them were barrel-aged sours, one featuring swede and potato and a couple of collaborations the chances are better still. Yes, after a short period in which we didn't much about new beers from Ballarat's Red Duck they're about to unleash the beasts again.

Indeed, among the first raft of releases is a beast, namely the Wolf, an American style pale ale American style Pale Ale featuring all US hops: Chinook, Simcoe, Legacy and El Dorado. The name comes from an old name for hops – Wolf of the Woods – and the beer, which uses a German Kolsch yeast rather than the typically neutral US yeasts found in such beers is described as "sessionably hoppy".

For the second new release, cast your mind back to last year's Good Beer Week and you'll recall that Brian Strumke from Stillwater Artisanal was in Melbourne and brewed a number of saisons in collaboration with local brewers. The last of them to see the light is Cactus, a "lambic saison" that has spent the past nine months in French oak. Those who've seen Stillwater's label artwork and know their ethnobotany will have an idea why the brew featured cactus, in this case Prickly Pear, while it was joined in the mix by agave syrup and a bunch of yeasts. Red Duck brewer Scott Wilson-Browne reckons it's "funky, tart, farmhousey, refreshing, interesting, and just one of the most freaking awesome farmhouse ales ever." Quite the claim!

Last of this trio is the appropriately named Bizarre Love Triangle, with the New Order reference a clue for avid Red Duck followers. The beer is an enhanced mix of the brewery's Blue Monday Belgian tripel. It spent six months in oak with the result, we're told: "something much more complex, different, softer, oakier, and delicious. Notes of a little caramel, butterscotch, vanilla and a whole lot of love."