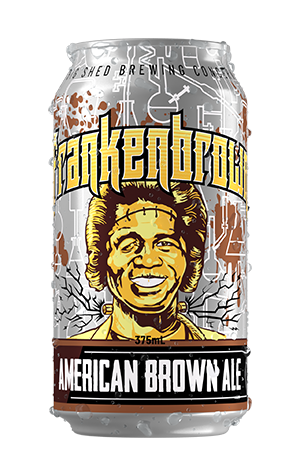 We were lucky enough to be present when the very first keg of Big Shed's first ever commercially released beer, FrankenBROWN, was tapped as it was being poured at The Wheaty on the same day The Crafty Pint was hosting an IPA Blind Tasting. That said, when we say "lucky", it was a luck that has to be qualified somewhat as the guys had filled the keg rather earlier than planned for the day so the FrankenBROWN wasn't quite ready and thus was rather rough around the edges: a Franken-FrankenBROWN if you like.

Since then their American Brown Ale has been brewed many more times – and given all the time it needs – and is now one of their core beers. Another one that looks to the US for inspiration, it's a mash up of many of their favourite ingredients and a beer they conceived in their home brewing days. The multitude of malts and hops delivers a deep brown coloured beer in which soft coffee and nutty characters from the malt go to work with lots of citrusy, piney and resinous hops that, to taste at least, are even more prominent than in their APA. A mouthful of a 5 percenter for sure!