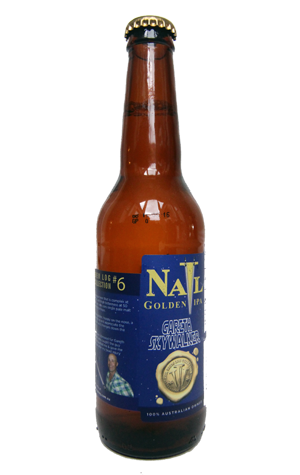 Throughout Good Beer Week 2015, WA stablemates Feral and Nail have been lining up some beer battles: taking over taps and challenging the crowds to decide who makes the better beers. Perhaps it's why Nail's John Stallwood has summoned the Force for his latest short run release, the Gareth Skywalker, named after Gareth Tarrant, the man who caught the attacker who put John into a coma in the incident that almost killed him last decade.

The beer brewed in Gareth's honour is Nail's first IPA and also one of the first beers to use new locally developed hop Melba. It's an India Pale Ale with the emphasis firmly on the pale and one in which the hops are used more for their aroma and flavour than any resounding bitterness. The Melba offers up melon and other subtly tropical characters – more akin to the Aussie hop Summer than some of the punchier recent arrivals. The beer's surprisingly delicate for one that measures 7 percent ABV and will be the first in a run a new beers from Nail over the coming weeks.