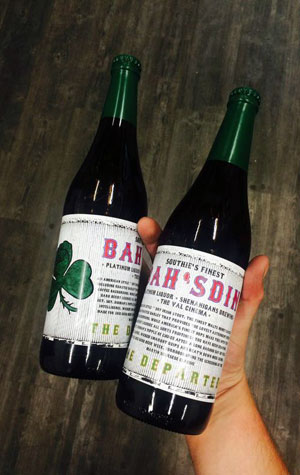 Ahead of Good Beer Week 2015, Shenanigans Brewing were approached by Adam Bellamy, proprietor of Sydney’s Platinum Liquor stores, to create a one-off collaboration to be launched at a re-screening of Martin Scorsese’s classic Boston-based Irish mob film The Departed. The beer and film pairing is something Bellamy had worked with before, previously teaming up with HopDog BeerWorks on La Boufe’s Bète Noire, a bourbon-aged American stock ale made to pair with the Coen Brothers’ rough and tough western, True Grit. This new beer, Bah’sdin, continues the theme of matching darkness on and off screen.

On the label it’s a dry Irish stout but, as with the corroborating film, there’s much more than what appears on the surface. Far from being a smooth and creamy quaffer, Bah’sdin is no-nonsense and even borderline aggressive. The malts, which include a touch of barley, create rich burnt roast characters that are backed up with plenty of astringency. Added to that are a generous amount of American hops which provide fruit characters like those of dark berries. There are enough hop and bitterness characters packed in here that you might even think it sits more comfortably in black IPA territory - it actually seems like Bah’sdin wasn’t ever going to be content being called a stout, it actually had to be stout. In fact, if there was a party of four percent stouts, most of them of them would be holding hands and singing “I’m a little teapot” while Bah’sdin was belting out Johnny Horton’s Mean Son of a Gun and tangling with a wild cat. Considering the beer’s collaborators recommend adding a shot of Jameson’s whiskey to the beer, this is indeed one stout stout.

NB there are also a few kegs of their Lime in the Coconut GABS beer around – a lime, coconut and vanilla infused IPA – but we're not listing separately as apparently the ingredients were a bastard and it won't come around again.