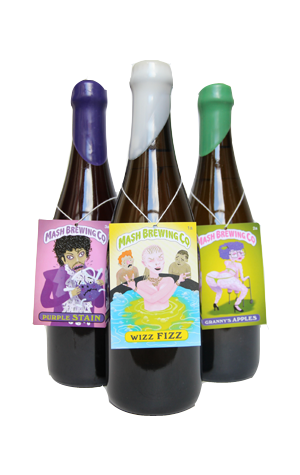 At their eastern outpost, 3 Ravens' brewery in Thornbury, Mash Brewing now has a tank dedicated permanently to the creation of sour beers. It's a passion of brewer Brendan O'Sullivan and the first beers to come out of the tank are this trio of Berliner Weisse style brews. You can read all about their inception – artwork and all here – and can also now buy them to try for yourself with the bottles all waxed and ready to go, complete with cards hanging around their necks like collectibles instead of labels.

The three are Wizz Fizz, the base beer that will be the only one regularly brewed. It's an unadulterated Berliner Weisse based on the recipe with which Brendan has had much success in home brew comps. Weighing in at just 2.9 percent ABV and 2 IBU, it has a bready character to the fore with a touch of apple fruitiness in the aroma and a spritzy, acidic finish.

Granny's Apples saw the base beer poured into French oak barrels where it was joined by some fresh Granny Smith apple juice and a touch of elderflower. The resultant beer is probably our pick of the three, a beer with a cloudy yellow appearance that has elements of both white wine and apple cider about it as well as a sherbet sweetness and a cleansing tart finish.

The Prince-adorned Purple Stain is Brendan's ode to purple drank and the grape drinks of his youth. Grapes, berries, cherries and hibiscus flowers are added to the base beer inside old Shiraz barrels, creating a Ribena-like colour and pinot noir like berry aromas that leap from the glass. There's a touch of the bready character from the base beer too.