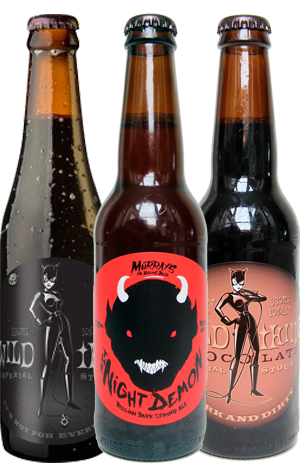 Leading the charge is an Aussie cult icon, the Wild Thing Imperial Stout that was originally brewed in Graeme's first stint at the NSW brewery and this year it comes with a partner-in-crime: Wild Thing Chocolate. For those that haven't sampled the original, it was one of Australia's first and boldest imperial stouts: jet black, viscous as hell, awash with dark liquorice and roast aromas, not to mention the sort of woozy booziness found on bigger red wines and an earthy bitter finish. Wild Thing Chocolate adds bitter dark cocoa nibs and vanilla pods to the mix creating differences that are subtle, certainly compared to the differences found between the last pair of Murray's imperial stouts, the straight Heart of Darkness and its oak-aged sibling. Indeed, Graeme says they'll probably up the amount of both next year; for now, the additions round out the aroma and add a distinct dark chocolate flavour and a more lifted finish. While it seems like sacrilege to say so, we probably favour the new version here (and believe someone close to the beer may too!).

The third big, dark beer appearing in bottle as well as keg this winter is The Night Demon. It's based on a recipe from this year's winner of the Newcastle Show home brew comp and is a 10.8 percent ABV Belgian Strong Dark Ale. It's dark in the rusty orange sense of dark and, at Crafty Towers, feels like an after dinner beer, the sort to share in place of a sherry or cognac. There's a touch of banana and toffee in its stickily rich body, some marzipan / almond too, plenty of rummy, spicy booze and one heck of a dry finish. Makes for quite the triptych, that's for sure.

Then nationwide at good beer venues