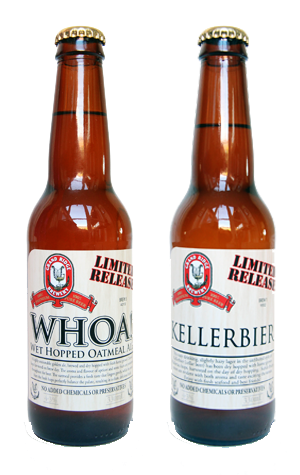 There's not much they don't do at Grand Ridge's home in Gippsland. Victoria's longest established microbrewery (some eight years older than Mountain Goat) brews beer, runs a pub and restaurant, offers accommodation and rears cattle fed on its spent grain to be served in the restaurant. It also grows its own hops: German variety Hallertau and American Chinook. And the two appear in the brewery's latest limited releases.

The WHOA! – or Wet Hopped Oatmeal Ale – is one that's been around before, collecting the odd medal at the Australian International Beer Awards in the past. It features the homegrown Chinook and also, rather unusually for a golden ale, some oatmeal. In the 2015 harvest release, the beer possesses some of the characteristics you'd expect: some fruity hops, a touch of caramel sweetness and a creamy mouthfeel, while you'll also find vanilla and coconut oil in there too.

The Kellerbier makes use of the other hop variety, which was harvested and used for dry-hopping on the same day. The beer is an unfiltered lager that, in this case, is dominated by fruity esters from the yeast. There's prominent honey malt sweetness too as well as a grassy, resinous bitterness to add some bite.

Available at the brewery in Mirboo North