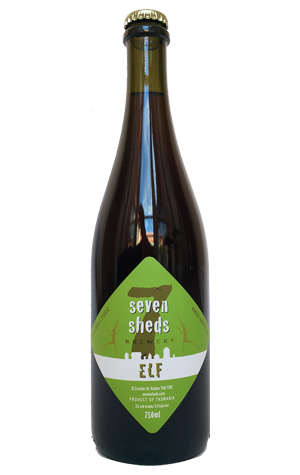 To mark its seventh birthday, Tasmania's Seven Sheds once again made full use of ingredients on its doorstep – literally. Originally a "very limited release" ESB (Extra Special Bitter) but now regularly brewed, ELF features two hop varieties grown at Seven Sheds within metres of the brew shed. They are the ultra rare Leggett and English variety Fuggle. A third variety, Ella, was grown at Bushy Park elsewhere on the island.

The first batch was titled 77 in reference to the name of the brewery and the fact it was launched for their seventh birthday, with the ELF coming from the aforementioned hop varieties. It was launched as part of a tap takeover at Launceston's Saint John Craft Beer and can now be found on tap at venues including the New Sydney Hotel and Empress Craft Beer Bar.

Seven Sheds makes ELF soon after hop harvest, a rich, malt led drop with floral, earthy, spicy hop characters every year and kegs are distributed to Tasmanian outlets during April and May. Bottles can usually be purchased through their Railton cellar door, stockists and online through to late Spring.