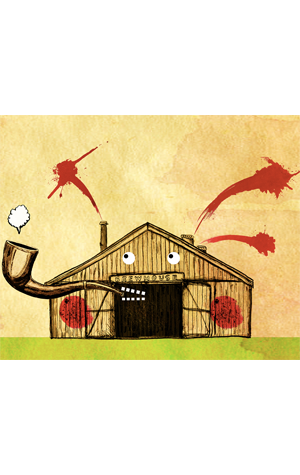 The third beer in the #tenredbeers mission Red Hill Brewery set out upon to mark their tenth anniversary was also their entry for this year's GABS. Following a plum saison and a red tripel, they opted to take inspiration from another region of Europe, this time the smoked beers (rauchbiers) of Germany's Bamberg. And they kept enough of the beer back to package some and slap another distinctive piece of artwork on the label too.

The beer is red in the blood orange sense of red and has plenty going on, and not just the prominent smoke from the hefty amounts of smoked malt that went into the mash tun. There are some fruity, estery aromas and flavours within its thick, 8 percent ABV body, and some chocolate sweetness too. That said, they're sandwiched between the sweet BBQ smoke aromas upfront and the lingering smoky bacon aftertaste that conjures one of the most vivid palate memories experienced at Crafty Towers: that of Frazzles, possibly the greatest crisp ever released in the UK. Mmmmmm... Frazzles...

NB: This year's Red Hill Imperial Stout, an Aussie craft classic, is out now too